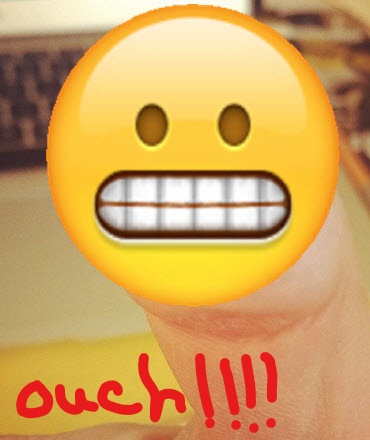 I have been having a pretty bad week, but it’s probably nothing like my husbands… um-mm Penis! The picture above isn’t of one, just a thumb that looks like one…I couldn’t bring myself to put an ex-rated photo! I didn’t want to offend anyone! (that’s not not like me is it??). lol..

He had his Bladder Tumor surgery removal on Wednesday, they knocked him out with Fentaynl and basically wheeled him out 15 minutes after he woke up!  He was blitzed! couldn’t even walk and had a major nose bleed after they took the hose out of his nose, he swallowed a ton of blood! He has to wear a catheter for 2 wks….lots of fun!

Once I got him home he was sick to his stomach, throwing up blood all over the bathroom, his aim was askew, missing the toilet! I put him to bed and hoped he would be OK. He woke up a couple hrs later having to eat (being type 2 Diabetic), I made him some porridge and he drank a ton of water and some apple juice, I put him back to bed.  It wasn’t long before he threw that up! This was going to be a long night!

Poor guy is in lots of pain, it’s a huge tube coming out of his … Tube, and he says it feels like his testicles were run over by a firetruck, and they backed over the hose!

He’ll be peeing blood for about a week, thankfully all the gross blood clots are almost done coming out! YUCK!  I seen ya shutter! lol…

He was able to shower today, but the tube is slipping out about an inch, I guess it got tugged on making it hurt even more, his catheter bag doesn’t have a leg strap to hold it in one position so we rigged up an elastic wrap to hold it…… He hurts when he tries to sit, lay down or stand.  I’ve never been good at being a nurse to someone, I’m short on patients…ha! ha!  I’m doing my best and it’s getting a bit easier.

Today is day 2, the sun is shining and I want to go and pull weeds but I think I’ll just go take a nap while my patient is sleeping, we both need it! Even the dog seems a bit off, he won’t go near hubby, I guess he smells funny and knows he’s hurt! Maybe I’ll walk him later since no one answered my plea on Facebook to walk him except my niece who lives a couple thousand miles away!  Oh well…… we’ll make it! As my friend Merry said, go slow, thanks Merry ….I will/we will!  🙂

What You Don't Know Can Hurt You

The World Is A Book...
Leya